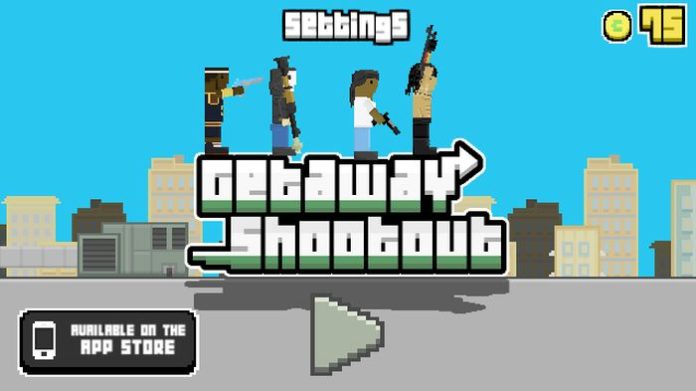 Here’s something for you to ponder today: what makes the perfect video game control scheme? Is the perfect control scheme one which immediately feels good, like a familiar pair of slippers? Many triple-A games of today seem to think so; most first-person shooters are of a piece in terms of player input, while many sandbox games utilise a tried-and-tested formula when it comes to movement and combat.

The alternative, of course, is a control scheme which is initially quite unusual, but which players can get used to over time, finding new ways to interact with that game’s world according to their level of mastery over the controls. Which of the two you prefer is down to how willing you are to experience something new; a familiar control scheme might be nice at first, but a new set of inputs is more likely to yield a memorable experience because it asks something new of you straight away.

It’s a question that Minnesota one-man development outfit New Eich Games wants you to consider. New Eich’s latest title Getaway Shootout, which you can play here, is a shooter / racer hybrid not entirely dissimilar to something like SpeedRunners. The goal of the game is to reach the getaway vehicle before your fellow criminals, who have presumably been less than reasonable in distributing the loot of a heist fairly. 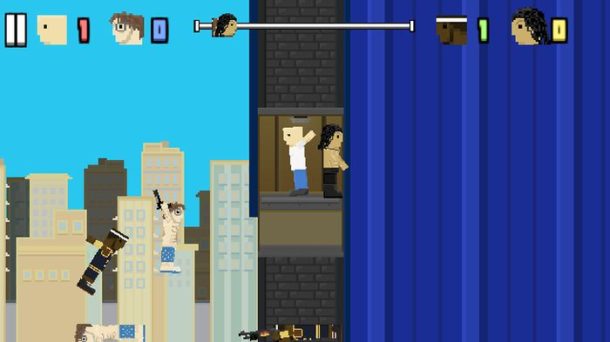 In order to do this, you must race your three former companions to the goal by jumping. Just like real criminals would, right? Each level is a linear succession of obstacles which must be surmounted purely by jumping. You’re not able to simply walk along the ground; instead, you must leap from obstacle to obstacle, hoping that you’re faster and more dextrous than your rivals.

If this control scheme sounds weird, that’s because it jolly well is. Two of the keyboard keys are used in this endeavour, with W jumping to the left and E jumping to the right. We say that, but really, each key more sets up an impending jump than immediately executes one. The length of time for each press determines the severity of the jump as well as the direction, you see, so if you press and hold the E key then you’ll go flying to the right, while the W key will hurl you to the left.

The chaos this causes can feel a bit jarring initially. The single-player mode of Getaway Shootout has you competing with 4 computer-controlled opponents, each of whom has (obviously) complete mastery over the controls. The AI does a pretty solid job of hiding this, though, and the way in which the computer simulates clueless player behaviour is pretty solid. Getaway Shootout is a game of accidental advantages and last-minute overtakes, and while the AI is nowhere near forgiving (don’t expect to win races until you know what you’re doing), it does provide an accurate facsimile of player behaviour. 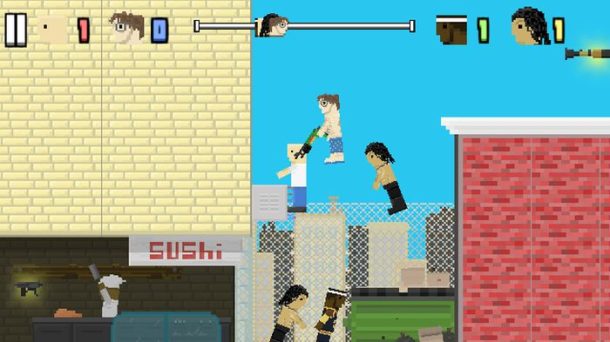 That said, this game is probably best experienced with a second player on the I and O keys, because at its heart Getaway Shootout has some of that watercooler spirit that games like Far Cry and (perhaps a little closer to home) QWOP invoke. Playing QWOP, you’d quickly build up a bank of stories to tell your friends about how you broke your previous record by simply mashing the keys, or how your character just managed to keep going for long enough to get a record despite the run being an obvious failure from the get-go. Getaway Shootout evokes that same feeling with its intentionally weird controls, daring you to achieve mastery so you can engage in heated competitions with your friends rather than so you can beat an AI opponent.

In order to help you do this, Getaway Shootout has helpfully peppered each stage with powerups, each of which feels unique and fun to use. There are weapons, of course, and they demand precision and skill from the player, just like the movement does. There aren’t many games where the simple act of firing a rifle and connecting with another player feels as good as it does in Getaway Shootout. A higher skill floor means more of a sense of accomplishment, as Dark Souls amply proved, and Getaway Shootout’s high demand for accuracy means that making a shot or using a weapon correctly just feels great. 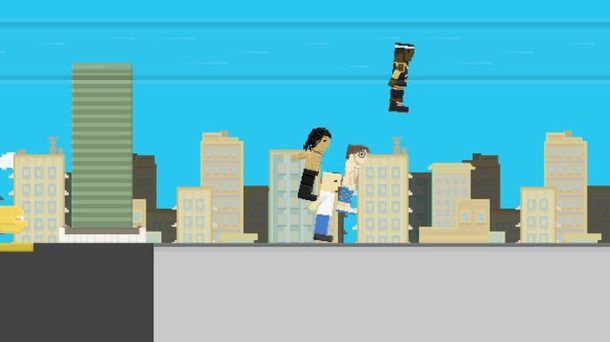 Of course, the movement system is designed for moments of comedy, and those are plentiful, but this does come with some minor drawbacks. If an enemy gains an early lead, they’ve probably won the game, which is fine for the two-player mode but can feel a bit galling in single-player. That’s why we recommend you move on to the two-player mode as quickly as possible; winning a game of Getaway Shootout is just more satisfying when it’s against another human being, as is the case with most multiplayer-focused games.

That’s not to say you can’t still have a blast in single-player mode, though. Getaway Shootout’s controls might seem initially intimidating, but their inherent simplicity and the immediacy of the game’s flow makes returning to it an addictive joy. There are unlockable cosmetic upgrades for your criminal, which makes the game more visually interesting, but the pixel-art style and chiptune soundtrack mean the presentation are already pretty compelling, so the act of playing the game itself is enjoyable every time. Grab Getaway Shootout the next time you’ve got a friend over and a score to settle, and once everyone’s used to the controls, it’ll keep you going for hours.